During my stay last month at Vila Joya Boutique Hotel in the Algarve, Portugal, I could not miss for a chance having a meal at one of the best restaurants in the world, Vila Joya Restaurant. For 17 times in a row, awarded 2-star michelin stars, this gourmet restaurant was considered among the 50 best in the world in 2015, led by the amazing chef Dieter Koshina, established in 1982. For a quite long period, this was the only two-star michelin star restaurant in Portugal, and now only one of the three in the country!

We started with a welcome drink and some surprises (appetizers) their bar/lounge area upon arrival. The place is really comfortable and relaxing, that’s the idea of the thing. If you are looking for fast food, probably there are some other places right?
The appetizers, just before the starters, were composed of 5 different things, for tasting:
1) Radish Tempura with goat cheese
2) Salmon Tartar Corneto with cream cheese and fish spat
3) Whitefish ceviche with grilled corn
4) Calf beef tartar
5) To finish a shot of apple, celery and wasabi

There were just 6 tables and all booked, all facing the ocean with wonderful views. Most of the customers were German, but also some British as well.
We were then escorted to our table, on their main dinning room, and welcomed by the remaining staff.
The menu for this day was composed of 3 main dishes, plus multiple surprises in between, and 5 different deserts.
Starting we had a marinated tuna, with cucumber and japanese yuzu ponzu sauce, followed by a tomatto soup with leeks, with raviollis stuffed with fresh cheese.
The first main dish arrived after a great start, the lobster loin with foam citrus, with curry flavours on a seaweed bed.
The second course landed just on time, a fresh and tasty marinated portuguese-style (escabeche) mullet with tomatto, sepia (little cuttlefish) and paprika.
Ready for the third round, we couldn’t miss one of the most loved portuguese dishes, the Iberian Pork Loin, with Pata Negra Ham, with gnocchi, cabbage and red sausage (Chouriço). This last one representes something that is unique in Portugal and Spain, the black pork, a free range pork that eats Acorn, the fruit of the cork tree, that exist in Portugal and Spain.

Meanwhile, we were of course suggested by the sommelier to try some of their suggestions for pairing during our meal. There were four wines we have tasted, starting first with a Rose Pinot Noir (Espumante Campo Lagro 2013), followed by a 2014 Sauvignon Blanc Quinta Cidrô. We continued with the whites while having fish, this time the 2014 white Grainha Reserve from Douro Valley, combining three unknown portuguese grapes (Gouveio, Viosinho, Rabigato).
To pair with our black pork, we were suggested the Palpite 2011 Grande Reserve from Alentejo, same region of the meat, a wonderful option featuring 60% Aragonez (Tempranillo), 20% Touriga Nacional e 20% Cabernet Sauvignon, a wine with dark violet colour and intense red fruit flavour. As you could imagine, there’s a strong incentive for Portuguese Wines, but they have a huge cellar with more than 10.000 wines available.

After this wonderful meal, there was still time for some surprises. Oficially only one desert, but ended trying 5 different choices, suggested by the chef.
Started with a strawberry icecream with lychees sauce, with raspberries and raspberry macarrons. Delicious.
Could not be complete with some fresh fruit, so this was followed by some pineapple carpaccio, with pineapple mousse and pineapple sorbet with roasted pine nuts.
Waiting for the “main” desert, which was a fantastic soup of white chocolat with red fruits combination (raspberries, blackberries and blueberries).
Almost finishing, we were granted as well some other gift from the chef, a chocolate mousse with physalis foam and Fava Tonka from Africa/Brazil.
The last one, to finish this majestic meal, we received an assorted combination of chocolats:
1) Olive Oil Jam ; 2) Salt and Caramel ; 3) White Chocolat with passionfruit ; 4) Chocolat Brownie

This outstanding tasting menu at Vila Joya has a cost of 195EUR Per Person, plus wine pairing at Sommelier recommendations, depending on the wines chosen, would add extra 120 to 180 Per Person.

Disclaimer – Often LuxuryTraveler is invited to experience some of the best resorts, airlines or restaurants featured here on this website. Please note that although some of the experiences here may have been sponsored, the reviews and reports are totally independent and reflects exclusively our personal experience.

Luxury Definition: Something that is an indulgence rather than a necessity, sumptuous or expensive, abundance or great ease and comfort 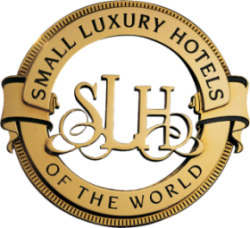 Often LuxuryTraveler is invited to experience some of the best resorts, airlines or restaurants featured here on this website. Please note that although some of the experiences here may have been sponsored, the reviews and reports are totally independent and reflects exclusively our personal experience.